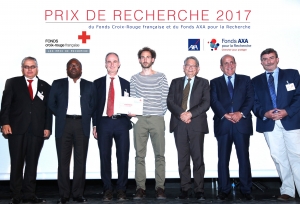 A conference entitled “Humanitarian transition and ethical reflections in Lebanon,” was held on November 16 and 17, 2017 at the Saint Joseph University-campus of the Humanities in Beirut, and was organized by the French Red Cross Fund, the Lebanese Red Cross and the University of Saint Joseph. Within the scope of this conference, the French Red Cross Fund and the AXA Research Fund presented this year in Lebanon awards to three laureates.